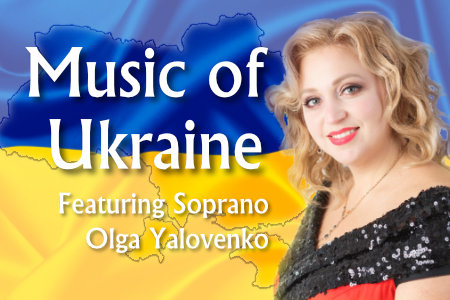 Join us in supporting the people of Ukraine. Soprano Olga Yalovenko, pianist Yaroslav Gnezdilov, and guest mezzo-soprano Leslie Ann Naeve are generously giving their time to provide this opportunity to experience the Music of Ukraine. There is no cost for the concert, but a free-will offering will be taken with proceeds going to the people of Ukraine through United Support for Ukraine (Hamtramck, MI) and Choir of the Resurrection (Ivano-Frankivsk, Ukraine). 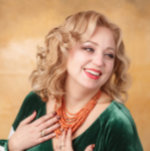 Olga Yalovenko was born Nov. 17th, 1987 in Ivano-Frankivsk. She started to play the piano at age 5 in the local music school and graduated from the Arts Institut of the V. Stefanyk Carpathian National University having studied with the renowned Mykhaylo Stefaniuk.

Ms. Yalovenko is a laureate of the International Competition ‘Silver Bell’ and the winner of the T. Teren Yushkiv Competition (Lviv, 2004); laureate of the Ira Malaniuk All-Ukrainian Competition for Young Vocalists (Ivano-Frankivsk, 2011); and semi-finalist in the First Open International Competition ‘Impreza’ (Kamianets-Podil’s’kyi, 2015. Since 2009, she has been a member of the Cathedral Choir of the Ressurection of Christ Cathedral in Ivano-Frankivsk. As a choir member, she was the winner of the International Choral Competition (Haynuvka-2012). As a soloist of the Ivano-Frankivsk Regional Philharmonic of Ira Malaniuk since 2012, Ms. Yalovenko has performed 4 solo concerts, sang the role of the Countess in Mozart’s Marriage of Figaro, and has been the soprano soloist for G. Pergolesi’s Stabat Mater and Mozart’s “Exultate jubilate”. From 2017-2019, she served as a vocal instructor at the Denys Sichynskyi Music School in Ivano-Frankivsk.

Ms. Yalovenko has performed solo concerts in the US in: Detroit, MI; Stamford, CT; Miami, FL; Cleveland, OH, and Chicago, IL. In May 2015, she performed concerts in the US to benefit soldiers wounded in the war zone in eastern Ukraine. In Dec. 2017, she gave many Christmas concerts, and in 2018 became a member of the Tuesday Musicale of Detroit. In 2018, she sang the role of Countess in Mozart’s Marriage of Figaro in Barcelona, Spain. From 2019-2020, she taught at the Institute of Cantors and Regents at the private higher educational institution, “Ivano-Frankivsk Academy of John Chrysostom”. In 2020, Ms. Yalovenko opened her own singing studio for children in Ukraine. In the summer of 2021, she participated with the “Voskresinnia” choir in a choral project named “Unknown Bortnyansky”. It was presented and filmed as five unknown concerts of Dmytro Bortnyansky in five different cities in Ukraine. 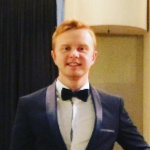 Ukrainian native, Yaroslav Gnezdilov, is a concert pianist and winner of numerous international music competitions including the most recent in the USA, Spain, Great Britain, Germany, Italy, Czech Republic, and Ukraine. He is a performing member of Tuesday Musicale of Detroit, Comic Opera Guild, and LaCorda music associations. Yaroslav earned his Master’s degree in Piano Performance in the USA, his Bachelor’s, and another Master’s degree from the prestigious Dnipro Academy of Music in Ukraine. Yaroslav was a soloist of Dnipro State House of Organ and Chamber music, frequently performing with prominent symphonic orchestras and at International music festivals. He currently gives solo and collaborative concerts with prominent musicians, choirs, and bands in concert tours across the United States and Europe.