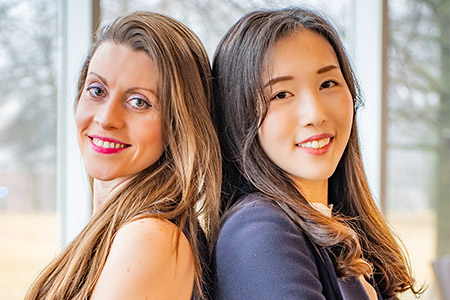 Please join Waterford Central UMC in presenting two celebrated pianists in concert in our Sanctuary. Dr. Aran Kim and Dr. Marina Stojanovska will combine their talents for a concert including works by Dvorak, Schubert, Brahms, and Detroit’s own Colin Payne. The concert is open to the public and a free-will offering will be taken to support the performers as well as the Central Church music department. Don’t miss the sensitivity and virtuosity of these two gems of the Metro Detroit music scene! 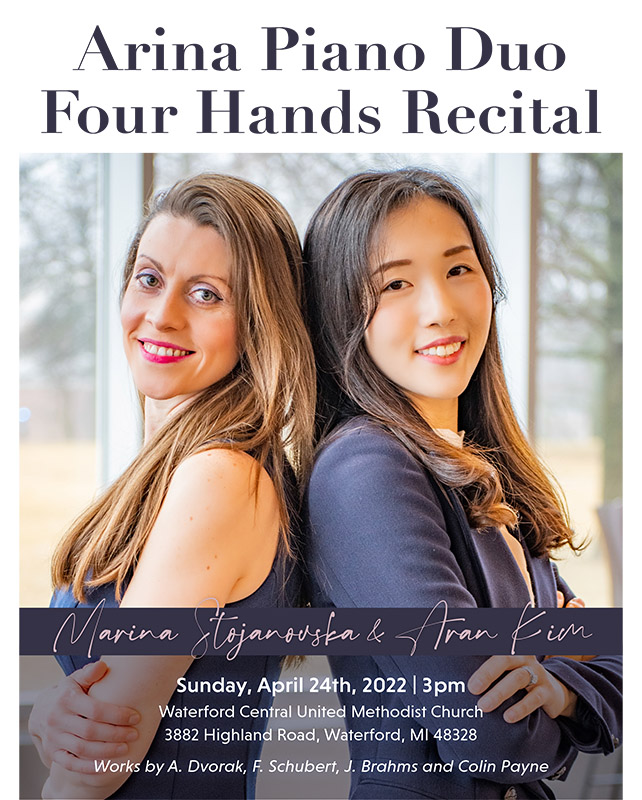 Born and raised in Dae-Jeon, South Korea, Dr. Aran Kim received a Doctor of Musical Arts in Piano Performance from the University of Arizona in May 2019 where she studied with Professor Tannis Gibson and held a full-time graduate teaching assistantship under the supervision of Dr. Lisa Zdechlik.

In 2010, she won 2nd place at Texas Music Teacher’s Association Young Artist Competition in Arlington, TX, and was selected to attend the prestigious Chautauqua Music Festival in Chautauqua, NY, where she was the finalist in the SAI Piano Concerto Competition. In 2011, she won the Annual Concerto Competition at Texas A&M University-Commerce and performed Grieg Concerto with the Wind Ensemble.

In 2013, she was invited as a distinguished alumnus at Kilgore College and performed Tchaikovsky Concerto with the East Texas Symphony Orchestra. In 2022, she was nominated as an award recipient of Alumni Ambassador at Texas A&M University-Commerce.

Currently, Dr. Kim actively maintains her musical career as a collaborative pianist at the Oakland University School of Music, as an organist/accompanist at Waterford CUMC and the Gilbert Jackson Chorale, and teaches in her private piano studio. She is a member of the National Music Teacher’s Association, and belongs to the MDML Chapter in which her students participated 2022 SAT in Piano and have successfully completed. She resides in Rochester Hills with her husband of 10 years, Sungjong, their two young daughters Evelyn and Kailyn, and a dog Moi.

Hailed by the Macedonian Music Society Post as “…one of the most expressive, versatile and fearless young pianists of Macedonia”, Dr. Marina Stojanovska made her debut with the Macedonian Philharmonic Orchestra at age 14 and her Carnegie Hall debut at 32. She holds two piano performance degrees from the Jacobs School of Music at Indiana University (Master’s, Performance Diploma) and a Doctorate Degree in performance from Michigan State University.

Dr. Stojanovska has performed recitals in Bulgaria, Serbia, Croatia, Germany, Brazil, and the U.S. She was a five-time First Prize winner of the MSC competition in Skopje, Macedonia. Additionally, she has won First Prize in numerous international piano competitions including Ohridski Biseri, Interfest, and Liszt-Bartok. Her performances were broadcasted live on Radio Meff, Radio Ternipe, Sitel TV, and Kanal 5. In addition to her solo career, she has an acclaimed piano duo with her sister, Natasha Stojanovska, known as “The Stojanovska Sisters.” The duo was a three-time First Prize Winner of the Macedonia State Competition.

She is currently a pianist at Oakland University and has a piano studio while also actively performing. She resides at Grosse Pointe with her composer husband, Colin Payne, and their one-year-old son, Connor.